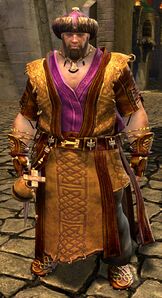 Pfft, what do you know? I'll take the dust to the streets and start my own food cart. I'll be rich!

Sous-Chef Seimur Oxbone is Chef Robertus' assistant. During Hidden Arcana, he can be seen arguing with Robertus over the use of Bloodstone Dust as food, which Robertus says is impossible. At the end Seimur states he's leaving the Priory in order to achieve his dream of making food out of the magical component. Soon enough, Seimur Oxbone starts selling various Bloodstone-related food around Tyria. However, he returned to the Durmand Priory during Arcana Obscura, a month after he began selling his Bloodstone-food.

Once the player reaches 425 in cooking, Seimur moves into their home instance and sets up a chef crafting station to help guide them to becoming a Grandmaster Chef.

His location varies; each day Seimur visits a different place. He moves eight hours after server reset, at 08:00 UTC (08:00) (Current times referenced at top right of page). During Wintersday he is denoted by the

icon on your map.

Home instance (after achieving 425 in the Chef discipline, as "Seimur Oxbone")

Seimur sells a different item every day. The trophy items are only sold during the appropriate Grawnk Munch step.

Seimur sells chef ingredients in the home instance of players who have unlocked the Gourmet Training collection.

(On Tuesday)
Tuesday's my favorite day of the week. No meetings! I can cook all the bloodstone waffles I want.
(On Wednesday)
Guess what day it is? Too slow—it's Wednesday! Which means bloodstone goulash for everyone!
(On Thursday)
Enjoying Tuesdays was so two days ago. Now Thursdays are all the rage. And I celebrate my Thursdays with bloodstone bearclaw pastries! Want one?
(On Friday)
Friday's a day for celebration, so I'm whipping out the bloodstone ice cream!
(On Saturday)
Hoo, that bloodstone mead is fierce stuff. But even after a night of drinking, nothing picks you up better than my bloodstone espresso!
(On Sunday)
Sunday's[sic] are usually slow, so I had time to make a complete bloodstone breakfast this morning.
(On Monday)
Start your week off right with a piping-hot cup of bloodstone coffee!

No, thanks.
(Before giving any food to Grawnk)

I have a grawl problem. Got anything that might help?

Hmm, try the bloodstone broth. It's a little light, so I'll make sure the proportions are generous.

Well, it turns out handling all this bloodstone is burning my hands. A lot. I'd happily part with this broth for a tiny snowflake I could cool my hands with.

(After giving Bowl of Bloodstone Broth to Grawnk)

The grawl's still there. Got anything stronger?

Seriously? Well, I've got some bloodstone soup. It's got a bit of everything in it. Possibly even the kitchen sink.

Working with bloodstone is a little hard on the old cookware. I could use a shiny frying pan if you come across one. I hear a skritt in the Harathi Hinterlands does great work.

(After giving Cup of Bloodstone Soup to Grawnk)

Seimur, I need your help. This grawl's got to go.

Drastic times call for drastic measures. To you, I unveil my masterpiece. Behold—bloodstone chili!

Tell you what. Get me one of those Superior Sigils of Mischief, and let me see if it can help cool down this pan. In exchange, you get the chili.

Within the Home Instance, after reaching 425 Cooking and reading his letter
See: Gourmet Training#Dialogue