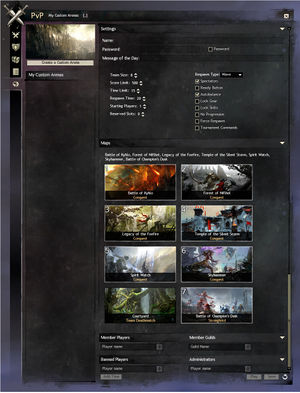 Custom Arena is an arena for structured PvP in which players can set options on a custom arena. With custom arenas, you can make your own place to play, you can organize private tournaments with friends, and you can challenge other teams to scrimmage.

You are allowed to customize your Custom Arena as you like. The following table outlines the possible settings available to you and their minimum and maximum values.

You may also customize the map rotation by clicking on the image for each map. By default, Battle of Kyhlo, Forest of Niflhel, Legacy of the Foefire, Temple of the Silent Storm, and Battle of Champion's Dusk are selected. Clicking on a map toggles between enabled and disabled as well as selecting it to be placed in the map rotation. The order in which you click determines the map rotation order.

Banned players cannot join the custom arena. This is different from an account-wide ban.

These commands were established to aid in running custom tournaments. Some of these commands will turn off progression for the remainder of the match in which you used it. [Example: using /gameend will not allow any players in the match to accumulate glory or rank points.]

These commands require you to have the designated player targeted. You do not need to type that players name. Simply acquire your target and type one of these slash commands.