They say she'll make three times any other ship's speed, with or without the wind. She'll be keener, hardier, and sweeter-sailing than anything crafted by mortal hands. No ship will ever defeat her in battle. None will outsail her. They say the Capricorn's the spirit of the waves.

The Capricorn is a legendary ghost ship adrift somewhere in the Unending Ocean. Be it tidal waves, storms, or cannon fire, nothing can breach her hull, and even when manned she sails under her own power with barely any need of a crew. 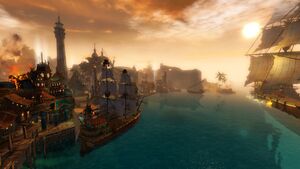 The Capricorn is a great black-hulled clipper ship. Three great masts rise above her, with crossbars six high on the main. The black ship is square-sailed, with massive triangular jibs reaching out to the end of her long bowsprit, and small rectangular canvasses hang on the top yardarms. If there is even a faint breath of wind, this ship catches it and use it for her own. Her stern is sharply raked, and her narrow body cuts through the waves like a knife through warm butter. The black ship's figurehead takes the form of a sea goat, horns curling and legs striking out as it coils a long fish tail beneath the bowsprit. In golden letters on the ship's stern shines her name: Capricorn.

The Capricorn was constructed in Port Stalwart in around 1229 AE. According to legend her shipwright freed an Istani djinn from captivity, and in return, it cast powerful enchantments on the ship. Cobiah Marriner attempted to steal her from Port Stalwart, and found this to be exactly the case. In fact, the spirit, a powerful Maelstrom djinn, still possesses the ship.

The most recent captain of the Capricorn was Peter the Lost—that is, until the sea witch, Covington, commandeered her. However, Covington never figured out how to tell it to weigh anchor, and had to abandon her. Now the Capricorn sails on, possibly forever, with no crew and no captain. Any who catch up to her and try to board tend to disappear.