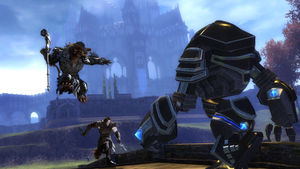 Siege Golems are large asuran golems that act as siege weapons in WvW. Siege golems move slowly and can be used as a battering ram, allowing the pilot to knock down doors and gates in addition to attacking enemies. The golem is the only siege weapon that is mobile. Their AoE target limit is 10. Unlike with other siege weapons, you cannot kick someone out of the golem you built.

Alpha Siege Golems are the most common Siege Golems. They glow in team color when active. These golems are constructed from

Omega Siege Golems have a much greater attack range than Alpha Siege Golems. They give access to the following 5 skills:

Guild Siege Suits are the guild variant of the Siege Golems. They glow in team color when active. Build sites are created from

Guild Siege Golem Blueprints. Once deployed, a build site appears, which requires only 50