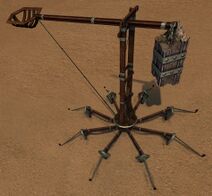 A trebuchet is a World vs World siege weapon that fires explosive shots or tainted cows over long distances of up to 10,000 units. The primary purpose of trebuchets is to destroy walls over distances too large for a catapult, although they can also deal reduced damage to gates and infantry, and cause a knockback effect. Alternately, the trebuchet can be loaded with tainted cows, which deal no damage but create a poison cloud.

Trebuchets also deal significant damage to enemy siege weapons, making them useful for defense in a similar manner to mortars.

Regular trebuchets are built with Trebuchet Blueprints, which can be bought from a Siege Master for either 24

(120 total) to build. They are built with Superior Trebuchet Blueprints, which are made in the mystic forge.

Guild trebuchets are functionally the same as superior trebuchets. They can be built with Guild Trebuchet Blueprints, which are purchased for 12

from a guild commendation trader or crafted by level 400 Scribes.