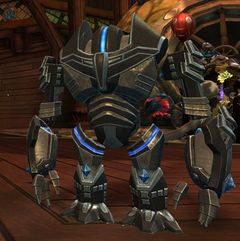 Mr. Sparkles is a golem created by the asura Flummox and named by his sylvari assistant, Sareb. When traveling through the Shiverpeak Mountains, their caravan got intercepted by jotun and the golem detonated while fighting them. Later, because Flummox needed money Sareb sold the golem to Zojja, who then heavily customized it and currently owns it. Sareb used her share of money from this trade to help Evon Gnashblade found the Black Lion Trading Company.

After the destruction the Pact fleet sent to confront Mordremoth, Mr. Sparkles is discovered in Verdant Brink badly damaged from either the crash or in the Mordrem attacks that followed to the point where it cannot even be salvaged for parts.