Claimed objectives display the guild's logo, and the guild name is displayed in the Objective Upgrades interface.

The Objective Upgrades interface can be viewed by:

The Guild Claiming panel is then shown by clicking on the second tab on the left. 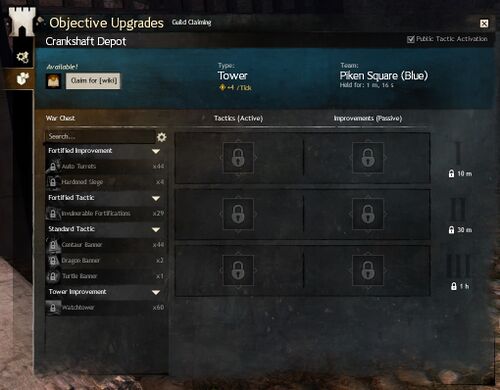 The top of the interface shows the name of the guild which claimed the structure, the type of structure, and the server.

Upon capturing an objective from an enemy team, guilds which contributed to the capture will be queued up with 10 second priority claiming prompt windows. This requires the War Room Guild Claiming upgrade associated with the structure type. Claiming a structure starts a timer to progress the Guild Claiming Tiers.

If no guild has claimed a structure following its capture, a claim button will be shown instead of the guild name, again available to any guild which has the associated guild upgrade.

If your guild has a prior claim then a warning is given that the new claim automatically releases the prior claim on the current WvW map. All tactics and improvements slotted into the prior objective will remain, but may be overwritten if a new guild claims the objective and waits for the timer. Cross-server guilds can only claim one structure per map regardless of team color.

On the left are the available upgrades stored within the treasury of the player's active guild. If a padlock icon is displayed, the player lacks the permissions to add the upgrades to the structure.

Upgrades may be added to the War Chest by consuming schematics, which are either crafted by Scribes or are contained within Improvement and Tactic Packs. Since upgrades are single use items, once deployed from the War Chest they are consumed, and will not be refunded to the War Chest if the objective is captured by an enemy team.

Additionally, upgrades can be replaced by members of the guild which claimed the structure, this will however destroy the existing upgrade.

On the right is a grid of upgrade slots, grouped into two columns. Walled objectives will have six slots (2 slots per tier), whilst camps will have only two.

There are three roman numerals to the right of the rows, representing the Guild Claiming Tiers 1 to 3. Camps will only have the first tier available.

Tactics can be inserted into the left column. A timer is displayed indicating the build (3 minutes) or recharge time (20 or 30 minutes) if a tactic has been placed or recently used.

Improvements can be inserted into the right column.

Once slotted, tactics take 3 minutes to build. Once built, a named tactivator becomes available, which when pulled will trigger the associated tactic. Ordinarily, any allied player can pull a tactivator.

Optionally, the guild which claimed the objective can choose to disable the "Public Tactic Activation" at the top-right corner of the Guild Claiming window, which will mean that only members of that guild can pull the tactivators. This checkbox will become checked if all members of the corresponding guild leave the map.

Once slotted, improvements take 3 minutes to build. Once built, the improvement effect is passively applied to the structure without further player interaction.

Although not shown within the Guild Claiming user interface, claiming an objective immediately applies beneficial aura effects to all allied players, the icon for which is shown above a player's utility skills.

The aura effects are granted by the eight Objective Aura upgrades that can be purchased.

If Presence of the Keep is active then allied players gain double effectiveness of all auras while within the perimeter of the keep, including doubling the max supply to +10, which raises the possible supply capacity to 25. 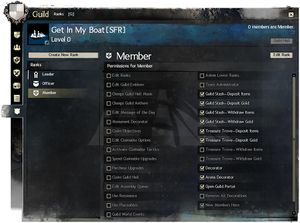 Permissions are associated with guild rank. Ranks can be viewed under the bottom tab of the Guild panel.

The related permissions to WvW are: