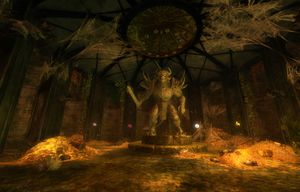 Statue of the Khan-Ur surrounded by the symbols of the four imperators.

The War of Succession[1] was a charr civil war that took place after the death of the Khan-Ur. Four children of the Khan-Ur—who led the High Legions of Ash, Blood, Flame and Iron as imperators—fell to squabbling over their sire's mantle. As none of the imperators were strong enough to defeat the others, they split the Khan-Ur's empire into four autonomous states ruled by their respective legions.[2]

During the Khan-Ur's reign, internal strife, reckless power-mongering, and brutal feuds threatened to tear apart his otherwise secure charr empire. Only the Khan-Ur's strong personality kept the charr from falling into squabbling factions. During the war against the humans who had arrived to claim Ascalon as their own circa 100 BE,[3] the charr warbands were united against a common foe and prepared to launch a bitter counterstrike, intending to burn everything in their retreat. However, as they planned the assault, the Khan-Ur was assassinated. It is not known who murdered the Khan-Ur, nor if one of the High Legions had been behind the assassination or if was the humans or their gods.[4]

With the Khan-Ur's death, the legions once more fell into conflict and chaos. In the wake over the power void, the four children of the Khan-Ur, who led their respective legions as imperators, squabbled among themselves while they accused each other of treachery.[1][2]

Unable to defeat their opponents, the imperators ultimately divided the charr empire into regions controlled by their respective legions—Ash, Blood, Flame and Iron—in their futile attempts to claim the title of Khan-Ur and regain control of all the charr legions.[5][6] The Claw of the Khan-Ur, a dagger once wielded by the Khan-Ur himself, was initially lost during the war, but it would eventually find its way into the hands of one of the Flame Legion imperators.[2][7]

The War of Succession distracted the charr for some time. This in-fighting allowed humanity a chance to recover and build up their strength and defenses in Ascalon, prolonging the conflict between the two races.

The split into four states made the four legions focus on their respective strengths, leading to different cultures and mindsets within the four legions. The Ash Legion would focus on stealth, the Blood Legion on open warfare, the Flame Legion on magical rituals, and the Iron Legion on technological advancement. While various claimants tried to use the Claw of the Khan-Ur and feats of strength to sway the majority of the charr on their side in the years that followed, none of them would be able to hold on to the title for more than a handful years at best. Even the Flame Legion at the height of its power was unable to turn its imperator into a new Khan-Ur due to him dying in the Foefire.

This division would be felt centuries later in the aftermath of the charr rebellion when the legions, which had broken free from the shaman caste of the Flame Legion, continued their rivalry up to the present day even while some of them were fighting alongside one another as allies against shared enemies.

Because it is unknown how many cubs the Khan-Ur actually sired, other heirs than the lineages of the four imperators are suspected to exist. Occasionally a smaller bloodline has surfaced with claim—but none have made a successful bid, and attempts from these would-be heirs have not led to any known conflicts among the charr.[4]