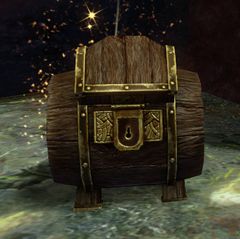 "Cryptonym" Strongbox is a strongbox in Undergrowth Connector. You must have Gliding Mastery Updraft Use to reach it.

Order of Whispers Camp Waypoint — in Tangled Descent, head east past the Mordrem (avoiding the hole in the ground with the waterfall pouring into it) and then keep left until the cave ceiling opens up a bit (you should now be looking at the area in the first gallery image). Hop along the ledge on the left over to a platform which likely has two Mordrem on it. Jump from the raised ground on the right and glide over to the nearby fungus pads. Climb these mushrooms and face east - glide onto the next two fungus pads on the root system opposite (per the second gallery image). Climb to the top and then jump up to the ledge with a Cave Screamer and a Vampire Beast.

Rounding the corner to the north you will see an updraft in front of you. Glide into the updraft, and then land somewhere to the left of the Veteran Vampire Beast (see the third and fourth gallery images). Jump over to the next root and climb upwards. At the top of this root is a tricky jump that looks deceptively easy—you have to hop to the right, onto an area which is very close to a slope that may cause you to slip off the root entirely. Continue along north to the last fungus pad with some Tropical Birds hanging out on it.

Alternatively, if you have a springer, start from

Order of Whispers Camp Waypoint — and follow the road until you are below the strongbox. Use two jumps to get up to the strongbox.