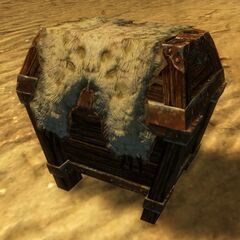 "Whitebear's Pride II" Strongbox is a strongbox in Northern Confluence Tunnel. Players must have Gliding Mastery Updraft Use to reach it.

Ley-Line Confluence Waypoint — in Ley-Line Confluence, head northwest and follow the ledge on the right. Once you see an opening on the wall, take the path on the right and follow the bend, following the path to reach an updraft and then take two more updrafts to end up on a platform occupied by 3 Veteran Earth Elementals. Defeating them will cause the wall next to the platform to open up and spawn the secret Earth Elemental. Kill it by attacking the hands (3 Veteran Earth Elemental will spawn once the first hand is killed); once he and the second set of three are all dead, the wall behind him will open up revealing the strongbox as well as a permanent Orichalcum and Mithril Node.