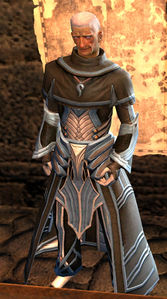 Never trust the past. There has been too much forgotten, too many things hidden beneath the sand of ages. Even your own memory can lie to you...

Decimus the Historian, of the Durmand Priory, wrote the Movement of the World[1], a document kept in the Priory, and quoted himself several times in the Movement. He seems to be an expert on the happenings between Kormir's ascension and the present day.

What? Ah, a visitor. I'm the Durmand Priory's chief chronicler, responsible for writing the history of Tyria even as it occurs. How can I help you?

For members of Durmand Priory after The Battle of Claw Island
I was sorry to hear of Magister Sieran's loss. Her sacrifice will be remembered.

Record her name among the great heroes of our order.

For members of Durmand Priory after Retribution
I saw the battle, <Character name>, and prayed for your success. The chronicle of your deeds shall be a long and storied one.

That's very kind of you Decimus. Thank you.