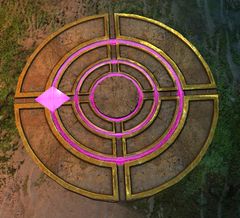 Interact
No
Destructible
No

A Launch Pad is a mechanic that accelerates the character in a specific direction. Players must move into the vicinity of a launch pad for it to activate. There are two types of launch pads, bounce pads and zip pads. Bounce pads launch the player vertically, allowing them to reach higher area are the next level of an arena. Zip pads launch the player in a horizontal arc, to cross gaps in the terrain. Launch pads were first seen as bounce pads in the initial release of Super Adventure Box in the form of Bouncy Mushroom. Bouncing pads were first introduced with Super Adventure Box's World 1, and zip pads were introduced (along with the first return of bouncing pads) in Dragon Ball Arena, as part of the arena mechanics before being added to other locations in various, improved, styles.

It is usually possible to start a glide after the apex of the flight trajectory.