Slay the Shatterer is a group event that occurs in the Lowland Burns in Blazeridge Steppes. It occurs as the final part of the meta event Kralkatorrik's Legacy.

These are the expected rewards for a level 50 player. Higher level players receive dynamically adjusted rewards.

The Shatterer will land north of

During the whole fight, players have access to the turrets, mortars, and launchpads.

If the Shatterer targets a player with

Shatterer Lightning Field while gliding, he will hit that player with an attack that will knock them out of the sky, potentially kill them. The Shatterer also has a slamming attack which sends out a wave of crystals which do high damage, and a roar which sends burning AoE and summons large numbers of spawns, including champions.

Periodically, the Shatterer's breakbar will change from segmented grey to teal, and if it is not broken before the window time expires he will become untargetable and use his Shard Storm attack.

It is advised to gather as many players as possible around the glider pads about 15 seconds in advance to allow coordination prior to each jump. Jumps should be done about 5 seconds before breakbar appears. The most common times for jumps are 14:15, 12:15, 9:45, 7:45 (see below for more information).

Beginning at 50% health, the Shatterer will use a skill every few minutes where he becomes Invulnerable and summons 5 Pulsating Crystals placed throughout the battlefield that will regenerate his health at a rapid rate. All players in the fight will receive a notification just before they are summoned. Each crystal has a Defiance bar that must be broken before they will take any significant damage, at which point they can be quickly destroyed. Once all crystals are destroyed the Shatterer will become susceptible to damage again.

The one after first set of crystals depends on time when they appear. A 1-2 second variance is common, but sometimes the big purple dragon doesn't follow this schedule. 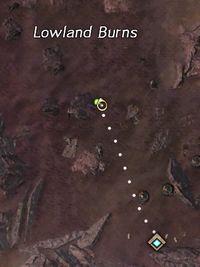 Section-stub. This key section of the article is incomplete. You can help the Guild Wars 2 Wiki by expanding it.
Reason: NPCs at base - should be complete, needs a verification for when event spawns

Before event starts
Warmaster Smoketail: It's too quiet. I need something to disembowel. (laugh)

Before using the breath attack
Vigil Crusader: Is it gonna breathe? It is, it's breathing! Watch out for the fire! Move, move, move!

Before using Impale
Vigil Crusader: Be ready to move—here comes the ground shake!

When it imprisons players
Vigil Crusader: Get everyone out of the crystals! They're going to explode!