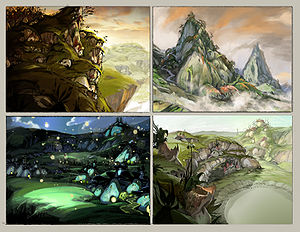 Concept art of the four cycles.

The sylvari are divided into cycles, and feel that an individual's personality is determined by time of day when they awaken. There are four distinct cycles during which a sylvari may awaken. A player chooses this option during the sylvari biography section of character creation.

The Cycle of Dawn refers to those born between midnight and 6 a.m. These sylvari are typically diplomatic and friendly, and are naturals when it comes to planning and conversing with others. Their Luminary is Aife, an experienced diplomat who has traveled to the major cities of Tyria. Aife is Firstborn of this cycle.

The Cycle of Noon refers to those born between 6 a.m. and noon. Those born at this time are fighters, skilled combatants who prefer actions over words. They prefer to experience things firsthand and attack problems head-on. Niamh is their Luminary, the leader of the Wardens and a bold warrior. Niamh is Firstborn of this cycle.

The Cycle of Dusk refers to those born between noon and 6 p.m. They are usually intelligent and philosophical, and enjoy studies and puzzles over physical pursuits. Their luminary is Kahedins, a kind soul who helps newly awakened sylvari understand their visions in the Dream of Dreams. The Sylvari of the Cycle of Dusk are said to be entertainers and crafters during the personal story. Faolain, Kahedins and Trahearne are Firstborn of this cycle.

The Cycle of Night refers to those born between 6 p.m. and midnight. These sylvari are inclined to be secretive and self-contained, preferring to travel alone. Their Luminary, Malomedies, is very private, and considered a stern and caring mentor. Malomedies describes Sylvari of the Cycle of Night as "sentinels, scoundrels, and mathematicians." Caithe, Malomedies and Wynne are Firstborn of this cycle.