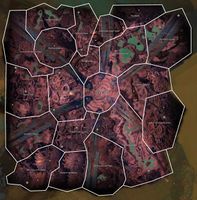 Map of The Ruined City of Arah

Arah was once the city of the human gods. Even after the deities quit this sphere, it remained a golden, shining place ... until the folly of man sank it beneath the waves. Yet worse was still to come. The Elder Dragon awoke, and pulled Orr from its watery grave, and raised hordes of undead minions from the twisted wreckage. Now Zhaitan's minions infest this place. We must rise above them if we hope to confront the Elder Dragon.

The Ruined City of Arah (or simply Arah), once called the City of the Gods, was the home of the Six Human Gods and marks where they first arrived on Tyria from the Mists. After the fall of Abaddon, the remaining Five Gods left during the Exodus of the Gods. Afterwards, the Orrians made Arah the capital of Orr and continued to maintain the city in hopes of the gods' eventual return. In the vaults of Arah, Vizier Khilbron retrieved forbidden scrolls that caused The Cataclysm, which sunk Orr.

In 1219 AE, Zhaitan awoke beneath the city, causing the kingdom and the city to rise above the waves. It now resides in the city, making its lair there.

Completing this dungeon or its PvP/WvW track awards Tales of Dungeon Delving which can be used to purchase the Arah armor and Weapons of the Dragon's Deep from any Dungeon Merchant. 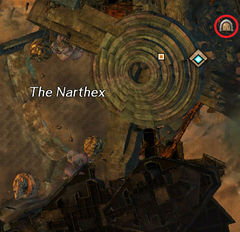 Location of The Ruined City of Arah entrance.