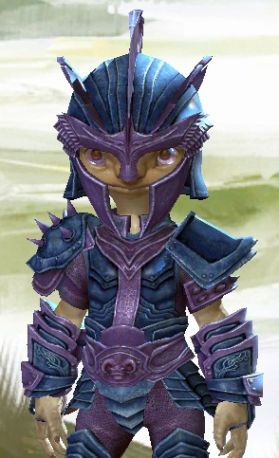 Personality: Whâkk is not vindictive or intentionally cruel but he is short tempered and more prone to physical violence than your average asura. If a there is a foe to fight, instead of summoning lightning bolts, undead minions or phantasms, Whâkk reaches for a sword, axe, hammer, mace, long bow or rifle.

Religious beliefs/philosophy: If you think his choosing to be a warrior means Whâkk is not interested in magic you would be very much mistaken. He simply has a much broader definition of magic than most anybody else. While most sentient beings would agree that an elementalist calling down molten rocks to smash his enemies and set them on fire is magic, Whâkk would argue that an engineer's mixing chemicals to produce a flame thrower or grenades is also magic. The charr can call what they do "technology" in order to delude themselves into thinking their somehow different than flame legion shaman but its all magic whether they have the intelligence to recognize it or not. Summoning a flaming sword is magic, but so is the process to produce a sword of steel. To Whâkk the warrior's skill with weapon is just as much a form of magic as necromancer casting a spell to drain life out his foes. Whâkk is also very much a golemancer. He just doesn't want golems to do the fighting for him, he has other ideas as to what golems are for (cooking, laundry other such tasks).

Childhood: traveled around Tyria with his parents until they split up. befriended by a norn from whom he learned to fight and from whom gained a taste for alcoholm

Recent history: lives in Rata Sum, when not fighting dreams of the perfect golem servant to bring him drinks, learning to make weapons and armor [weaponsmith and armorsmith crafting professions].

Notable relationships: mentor: Bronk, member College of Dynamics, seeks membership in the Vigil (some one has to teach those bookah how to fight a dragon)

Disposition towards other races:

Sylvari: he likes the plant people and is sorry their first experience with asura was so unpleasant.

Norn: is impressed at how tough even their spell casters are, envious of their ability to hold alcohol

Charr: they smell bad, the Black Citadel is too noisy and their failure to recognize that "technology" is magic makes them more deserving of the name "bookah" than the humans or norn

Humans: disdainful of human's notion that magic came from their gods, but what else could you expect from bookah. humans are good for manual labor, if no golems available

Other asura: many asura think Whâkk is crazy, but he thinks they're either not bright enough to recognize the joys of physical combat, too lazy to lift a sword, or probably both. He thinks the scholar professions are overly concerned with "obvious, showy magic" and doesn't usually like to hang around asura elementalists, necormancers or mesmers. He prefers the company of asura warriors, guardians, rangers, engineers and thieves even though they don't always recognize their own skills as magical they are at least more tolerant of him and therefore he's more tolerant of them.

Whâkk joined the Vigil and chose to aid the hylek and to recruit a couple of charr into the Vigil.

Chapter 4: Some Must Fight, That All May be Free

Chapter 5: A Friend In Deed

☑ Chosen of the Sun

Chapter 6: This Far, No Further

☑ The Battle of Claw Island

☑ A Light in the Darkness

Chapter 7: The Cost of Victory

☐ The Battle of Fort Trinity

☐ Temple of the Forgotten God

☐ What the Eye Beholds

☐ Against the Corruption

☐ The Source of Orr

☐ Honor of the Waves

Whâkk's Answers to 100 Questions About Your Characterl (note: he skipped the ones he thought not worth answering).