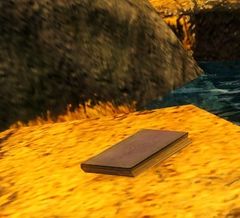 The Four Djinn is a book that can be found in the Mythwright Gambit, down on a rock in the water to the left from the starting area, between the entrance and the first boss, the Conjured Amalgamate.

A few days east of Amnoon, deep in that sea of sand, one would be lucky to find themselves faced with my predicament. A quartet of djinn hovered in their way, arguing at length about the nature of their elemental leanings.

I stood there for quite some time, listening to their grand debate, and realized with a hint of fascination that these djinn had been arguing amongst themselves for months, never once breaking from their disagreement no matter the time of day, the weather, or passing company. Djinn, as I discovered, need not the sustenance required by other living beings of Tyria. Their connection to the world through their representative element seemed to be all they needed to persist in life.

Unfortunately, as was the case for most visitors to that desolate sea of sand, I was in need of direction and had not the energy nor the provisions to seek out another means of acquiring it.

When I approached the four djinn, they paid me little heed. The one of flame barely acknowledged my presence, snorting something obscene before returning to his debate. The air djinn ignored me entirely, looking through me as through
[sic]
I was made of naught but the element itself. The earth djinn broke away from its train of thought for but a moment to stare me down, but it was the water djinn that decided to offer voice to thought.

"Perhaps this one should decide!" The djinn waved one of its arms in my general direction. "A neutral party to break this horrid stalemate!"

The other three finally stopped their arguing, all now staring at me from on high as one might evaluate a fly impeding on their breakfast. "This one?" The fire djinn's face wrinkled in disappointment. "It's rather small, isn't it? How could it possibly know what's at stake?"

"I think it's a novel idea," said the air djinn. "But we must first explain the nature of this disagreement."

"There is no disagreement." The earth djinn was less than receptive, crossing both pairs of arms, doubly suspicious. "You three have simply yet to accept that without the earth beneath us, your elements are useless."

The water djinn was resolute. "Again, we get nowhere. But this one, this human, it lives on the earth, drinks of the water, breathes of the air, and uses fire to banish the darkness of night. It finds use in all of us."

"Perhaps so," said the earth djinn, unmoved. "But again, without the earth, it cannot breathe, it cannot drink, and it most certainly cannot banish the darkness."

The other three djinn had grown tired of the stalemate, but evidently were not keen on ceding ground to the djinn representing it. They all turned to me, surrounding my person, hovering half my height from the sandy dunes. Unblinking eyes on me, they loomed with more than a hint of malice.

"Well then," the air djinn started, "I believe an explanation is in order."

"We four represent the elements of nature." The fire djinn floated closer, perhaps as a means of intimidation. "And one of us is clearly more powerful than the others."

Finally, for the first time since I intruded on their debate, I spoke: "Is there not balance to be found in nature?"

The djinn, all four, laughed. "Balance is an illusion," said the earth djinn. "Nature strives for balance but never finds it. Rain comes from an imbalance between water and air. Volcanoes, from earth and fire. Sandstorms, from air and earth. This is why we bicker endlessly."

"And also why you must tell us which element is greatest," said the air djinn. "Now speak."

I pondered this for a time, but could tell my hosts were not keen on waiting. I decided to explain my rationale aloud, though I knew that no matter what answer I came upon, the quartet would no doubt remain unsatisfied.

"Well, let us look at my situation," I started. "Living creatures of Tyria must tread the ground, giving it inherent worth and value."

"As I expected," said the earth djinn, puffing out its chest. "This debate will end shortly."

"But," I continued, much to the earth djinn's consternation, "here we stand amongst the dunes. I have struggled to tread this ground, for it is pliable and unstable. I am exhausted from my travels, and the sands do little to ease it."

I turned to the air djinn, who seemed initially pleased with my dismissal of the earth djinn. "The air," I continued, "though it is sweet and cool in the evenings of Crystal Oasis, it is here hot and dry, parching my throat."

I turned to the fire djinn. "And the baking hot sun offers little in the way of comfort. The heat is absorbed by the sand, coursing through the air. Earth, air, and fire conspire to end my life in the dry sands of Elona.

The three djinn I spoke of grumbled and turned expectantly toward the one remaining.

"There is, however, one element that could ease the discomfort of the other three," I said. The water djinn, pleased with my words, raised its arms and manifested a magnificent orb of pure, fresh water. It hovered before me, kept aloft by the djinn's will.

"Then consider your discomfort eased," said the water djinn. "Drink, and let us speak of topics unrelated to the elements for a time."

So it was that I came to befriend that water djinn, though at the expense of the other three. They were less than enthused to lose their months-long debate, and refused to speak with me ever again. Still, the water djinn was able to point me to my destination, and accompanied me in both company and conversation as far as its disposition would allow.

Much time has passed since that fateful encounter, and I have come to rely on this water djinn as much as it relies on me. We left the hot sands of Elona for the more temperate Kryta (both in temperature and disposition), but I have many times found myself thinking back to that meeting in the dunes. No matter what the circumstances, I arrive at the same conclusion as to which of the elements should earn humanity's favor: the earth is broad and awe inspiring, but it cares little for the comfort of its denizens; the air perpetuates life, but does not improve its quality; fire gives light, but burns hot in the skies of Elona. It is water and water alone that provides respite from the elements, and makes life in Tyria's harshest conditions even the slightest bit tolerable.

The conversation is quite acceptable as well.