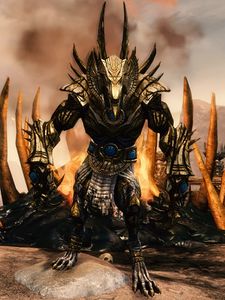 As this squad's leader, I'm not about to let my troops be slaughtered by someone else's ineptitude.

Beastmarshal Oluwa Eranko is one of the Awakened generals in Palawa Joko's army. She is the commander of Elona's Awakened mounted units which utilize raptors.

After Awakening, Oluwa Eranko served Palawa Joko faithfully as a Beastmarshal in charge of the Kingdom of Elona's mounted troops. The arrival of the Elder Dragon Kralkatorrik and its Branded horde and the invasion of the fallen god Balthazar's Forged army in 1330 AE depleted the numbers of the Awakened army who were waiting for Joko to return and issue orders to them.

The Pact Commander and members of Dragon's Watch, disguised as Archon Iberu and Awakened via a mesmer spell, arrived at the beastmarshal's camp to convince her to lend her troops to thwart Balthazar's advance. Despite being corteous towards the famous archon who claimed to be carrying out Joko's will, Eranko was not willing to grant the archon sole command over her troops out of worry that they might die because of someone else's ineptitude.

To settle the matter out of respect to King Joko, the beastmarshal suggested a test of the archon's abilities as a rider to prove his worth as a leader. After the disguised Commander had successfully demonstrated exceptional riding skills by catching up to the Beast of the Valley, Eranko honored the deal and pledged her troops to the archon for the defense of Kodash Bazaar where Balthazar's army was headed to confront Kralkatorrik.

Eranko met with Troopmarshal Olori Ogun and Wurmmarshal Osa Ekolo at the western gate of Kodash. The marshals dispatched soldiers to the other three gates as well, but chose to remain in their present location themselves to wait for the archon. The Commander, still under disguise, went to the marshals and issued orders to them. Eranko's mounted corps were instructed to disrupt Forged snipers.

Balthazar arrived soon after with his army headed by a giant machine called the Warbeast. The marshals faced the Forged in combat, each one commanding their forces valiantly. However, they were unable to stop the Warbeast and some of its escorts from invading Kodash, forcing the Commander to give chase to the war machine before it could kill Kralkatorrik.

After Balthazar had been slain and the Battle of Kodash Bazaar had ended in the Awakened army's favor, news eventually spread about the disguised archon's real identity being the Pact Commander. Despite realizing that they had been tricked by an outlander, the marshals decided to wait for Joko's return and oblige should he demand retribution for the Commander's actions.[1]

Palawa Joko returned after Balthazar's demise and planned to unleash an improved Scarab Plague on Central Tyria to have his revenge on the Pact Commander for leaving him behind in the Domain of the Lost. The lich king bred scarabs in the Domain of Kourna and ordered Oluwa Eranko to travel to Gandara, the Moon Fortress along with Troopmarshal Olori Ogun and prepare their cavalry and infantry to face the eventual invasion of the Pact Commander's allied forces who would be trying to stop the release of the improved plague. Eranko remained unaware of the Commander's presence in the area, however, when the Commander used Blish's technology to stay unseen during the allied forces' scouting of the outskirts of Gandara in 1331 AE.

By the time the Commander's allies assaulted Gandara, Eranko did not lead the defense outside. Instead, she stood in wait deep within Joko's sanctum to welcome the Commander whom Joko was expecting. When the beastmarshal met with the Commander and Braham Eirsson, she revealed that she did not mind the Commander tricking her because the Battle of Kodash Bazaar had been the greatest military victory of her career. However, she also explained that she had to obey Joko's will, and attacked the pair. Eranko was felled after a fierce clash, being the final obstacle before the Commander could confront Palawa Joko himself.