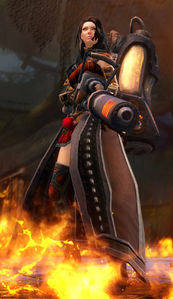 Useless! What do I pay you for?

Section-stub. This key section of the article is incomplete. You can help the Guild Wars 2 Wiki by expanding it.
Reason: This has more to do with the overall fight than her behavior specifically, so either move to the raid page and list her behavior or remove this part entirely if it's already on the raid wing page and she has no behavior