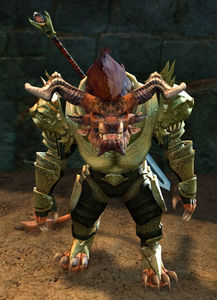 Watch Commander Talon was the Lionguard in charge of Claw Island before the Battle of Claw Island. Talon was overly confident that there was no threat of attack, and even if one were to occur, that the fortress was capable to withstand anything. He refused to listen to Trahearne's warnings, brushing him off as just a scholar and not a soldier, which in the end proved to be his undoing. He refused to admit defeat until taking a mortal blow, where he finally ordered a retreat, dying after doing so.