This article is about the renown heart game mechanic. For the NPC service, see Renown Heart NPC.

Renown Hearts also called renown regions, tasks, task hearts, task regions or simply hearts, are fixed areas within an explorable zone that give a set of tasks for a player to assist with and provide a reward upon completion. A description of the tasks is listed under the heart name in the interface. Each renown heart area is anchored by Renown Heart NPC with supporting lore and local goals that need to be accomplished. Most zones have a few hearts scattered throughout that are required for map completion. Players do not have to talk with the NPC to start a renown heart, although some hearts can be completed quicker by doing something found out by talking to the heart NPC. Hearts are reminiscent of traditional quests in other MMORPGs. Rather than being given as a checklist of tasks a player needs to do in sequence, players simply follow a list of possible actions or activities that contribute to the progress of an area's renown heart. Renown hearts provide static content in the absence of events. Much of the design of areas will have events and renown hearts overlap on contributing actions and lore. In most cases, there are a couple events in the vicinity of a renown heart which involve killing enemies that contribute to the renown heart. Hearts reflect regional, broadly accomplished, finite objectives for content, while events are dynamic, specific directives that may be encountered and consequently won or lost multiple times.

With the exception of Bloodstone Fen, Dragonfall and Dragon's End, all of the new maps introduced in Living World Season 3, Path of Fire, Living World Season 4 and End of Dragons also have Renown Hearts, with the difference from the originals being that these are repeatable each day after Server reset.

Partial completion is indicated by the heart icon being partially filled with yellow, from the bottom, acting as a vertical progress bar.

Hearts are invisible on the map until you discover them. You can discover them by talking to a nearby scout, or walking into its range. When a player moves within range of a renown heart, the heart icon along with its description and progress meter all appear as an entry among other listings in the event assist column. Unlike events themselves, hearts are constant on the map once discovered, and will not vanish from the map when a character travels elsewhere. Progress on the heart can be started or stopped at any time; no NPC interaction is required to begin progress on a heart, although the progress on some hearts may be completed quicker by taking on a specific task found by talking to the NPC.

Progress can come from a wide variety of player actions, from simply killing foes to performing other tasks like watering plants or feeding cattle. Resurrecting NPC allies will always count toward a heart's progress, even if it's not mentioned explicitly in the task list, and often events in the nearby area can contribute to completion. Players are not obligated to participate in all contributing tasks to complete the heart, and may pick and choose tasks as they see fit. Curiously, taking down an enemy such as a world boss offers no progress to any nearby heart.

Though heart progress is displayed as a rising yellow bar on the heart icon, the exact percentage of completion is normally not displayed. There is one exception: being in a squad with "view as grid" unselected will display a heart icon next to your name in the squad UI, which you can hover over to view completion percentage. The progress of other members of your squad or party may also be tracked in this manner. 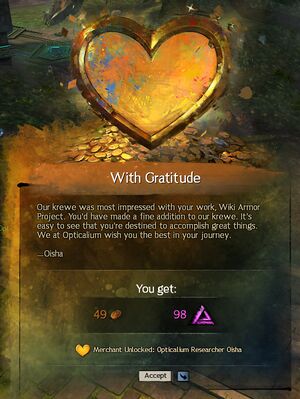 Once a heart is completed, players are rewarded with experience and receive a popup from an NPC expressing gratitude and containing karma and money. Additionally, the Renown Heart NPC will begin selling karma goods. These goods will vary by NPC, with rewards including consumables, recipes, weapons, armor, etc. These goods may be purchased at any time afterwards as long as players have sufficient karma for the purchase. Completing a heart will also contribute to both area-wide and total percentages of map completion.

The karma reward starts at 90 karma at level 2 and increases an average of 7.5 per level. The reward increases by 8 for level 1 and 2, then increases by 7 for level 3 and 4, repeating this pattern every 4 levels.