Tactics & improvements for upgrading World vs. World objectives claimed by your guild. Items in the War Chest are only available for use in WvW. Spend the items by interacting with claimable objectives in a WvW map. 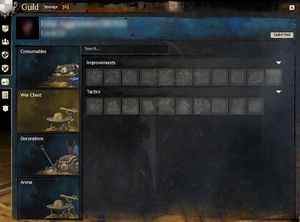 The War Chest is a World versus World feature of guilds that facilitates Objective upgrades. Full use of the feature requires several War Room related Guild upgrades. The contents of the War Chest can be viewed through the Guild panel's Storage tab. The War Chest storage allows guilds to use both Improvements and Tactics to enhance claimed objectives in WvW.

Improvements and Tactics can be crafted as Schematics through Scribing or dropped randomly as gizmos from Improvement and Tactic Pack. Schematics must be assembled in the guild's Assembly Device before they appear in the War Chest and become usable. Similarly, the gizmos from Improvement and Tactic Pack must be consumed to grant the improvement or tactic to the represented guild. The Improvements and Tactics are usable only for players who have been assigned a rank with the "Spend Claimable Upgrades" permission in the guild they are currently representing.

War Chest items can only be used within a World versus World map. In order to upgrade an objective, it must first be claimed by a guild, though it does not necessarily have to be claimed by the guild you currently represent. Once an objective has been claimed for a sufficient time period, you can simply click on the Objective on your map, open the Objective upgrade UI's Guild Claiming tab and double click an upgrade to apply it. Applying an upgrade or tactic reduces the number of those available in your War Chest, and the upgrades can not ever be withdrawn back from an objective.