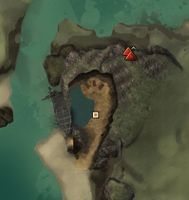 Wiley's Cove is a shoreline cave that serves as the base of operations for Captain Wiley and his pirate crew within the Newbeach Bluffs. The largest opening is blocked by a pirate ship forming a small lake within the cavern, and the smaller cave mouth is well defended by pirates and cannons.

The entrance to the cave is on the beach south of the point of interest, though it is also possible to swim under the ship that blocks the larger entrance.