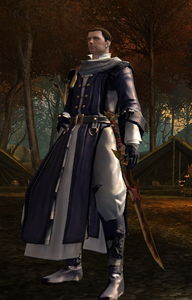 I'm heartened by Ambassador Steelcrush's attitude. I really think we can find compromises that help both of our people.

Minister Kent Duran is the human Krytan ambassador sent to negotiate the treaty with the charr at Summit Peak. In 1325 AE, a new leader of the charr Renegades, Ajax Anvilburn, planned to kill him and put the blame on the charr Ambassador Aximus Steelcrusher to disrupt the ceasefire between humans and charr. This plot was brought to Duran and Steelcrusher's attention by Eilye Jeyne, Warmaster Forgal Kernsson, and Forgal's recruit, and Ajax was swiftly dealt with, putting a halt to the Renegades' plan.

I thought once we got to the peace talks, it'd be easy. But this has been as much a challenge as anything we've faced before!

It's the extremists. The Renegades would rather kill other charr than accept peace with the humans. I hear they're stockpiling munitions for an offensive against the summit itself!

What about the local humans? How are they taking the treaty?

Ebonhawke wants peace, but some humans are willing to burn the whole treaty down rather than admit the charr have won Ascalon! They call themselves Separatists. I'd say "lunatics" is a better name.

Maybe bringing them in for the talks would appease them.

There's no way to talk peace to people who only want more war. We've had to write them off completely. Our best hope is to hold them in check until they fade away.

I wish you luck then.

After years of war, I'm surprised you thought any of this would be easy.