This article is about Explorer achievement. For other uses, see Grounded. 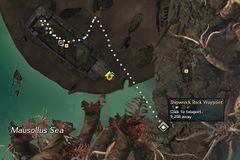 Grounded is an Explorer achievement and mini-dungeon in Desmina's Hallows within Cursed Shore. It involves exploring the bottom level of Captain Rotbeard's haunted ship grounded at Death's Anthem.

Shipwreck Rock Waypoint — , head northwest until the shipwreck is on your left.

Walk carefully up one of the masts leaning against the wreck, and jump down onto the deck. In the center of the deck is an open hatch. Once you go down the hatch continue forward until you find another set of stairs leading down into the hold. The achievement should appear when you stand roughly in the middle of the hold area, likely among an assortment of Risen pirates.

Additionally, it can also be obtained by walking against the outside rock wall below ship directly south west of the point of interest.