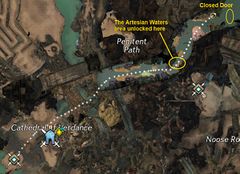 Route to the locked door.

Forgotten Stream is an Explorer achievement and mini-dungeon located in Cursed Shore.

Verdance Waypoint — loading… in the Cathedral of Verdance head north-east into the water. Swim under the wreckage directly ahead and you should surface in a large tunnel.

This mini-dungeon is straightforward: run through the tunnel past the enemies until you get to the locked door at the end. The foes are mostly Orrian Spectral weapons and Risen, many of whom use AoE attacks, and if you do not have any sort of stealth, will likely need to fight through many to reach the end of the corridor. If you do not have the achievement for the mini dungeon, it is awarded just before arriving at the closed door at the far end.