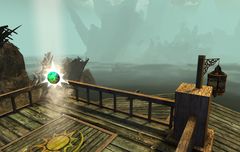 Camp Reclamation Waypoint — . Kill a Ley-Line Scavenger and harvest its organ, then swim over to the northern side of the Buoyant Bough and climb onto the floating platform with crates on it. Use skill 2 to launch yourself into the air, then glide onto the narrow ledge beneath the mesh windows. Carefully follow the ledge west until you reach the deck. Head inside and use the Bouncing Mushroom to propel yourself into the air, then glide over to the insight.