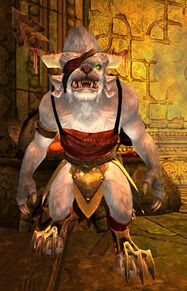 All right, chefs! Tie up your aprons and fix your silly hats—it's time to make some grub!

Mellitus is a Pact cook who helps the forces of the Pact and the charr High Legions by filling their hungry stomachs with tasty food.

Mellitus seems to have known Lightbringer Tybalt Leftpaw in the past as he has mentioned a charr who could not get enough of apples—Tybalt's favorite food.[1]

In 1332 AE, Mellitus accompanied the Pact to Thunderhead Peaks where he set up his kitchen in the Forge of Thunderhead Keep to feed the hungry soldiers. As Pact forces prepared to lure the Elder Dragon Kralkatorrik into a trap set up in the Auditorium, the charr chef offered the Pact Commander a Hearty Meal. He was among the survivors of the Battle of Thunderhead Keep and would later learn that the Commander had prevailed against Kralkatorrik on Dragonfall with the dragon Aurene's help.

Later that year Mellitus was summoned to the Blood Keep in Grothmar Valley for the All-Legion Rally which Imperator Bangar Ruinbringer had organized to bring the High Legions and the Flame Legion together and celebrate the death of Kralkatorrik. He was given the title Head Chef Mellitus and was put in charge of the Keep Kitchen. In this capacity, Mellitus cooked great feasts for the festival although he soon realized that the menu would be too massive for him to handle by himself in the given timeframe. He resorted to asking passing adventurers, including the Pact Commander, to help him prepare the feast, and appointed willing participants as his sous-chefs. Mellitus and his assistants were able to prepare the dishes in time, and the Head Chef showed his appreciation for the assistants' hard work.

During event
I'd appreciate the help if you have time to prepare ingredients for me.

What can I do?

I'll call out an ingredient. Chop it, grill it, or toss it to me whole depending on how I ask for it. Interested?

I don't have time now.

I don't have time now.