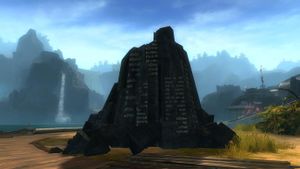 IN MEMORIAM Osh Moran, captain of the Valor. The first of many who have paid the ultimate price for our city's freedom. May their courageous sacrifices be remembered.

Captain Osh Moran, captain of the Salma's Grace, fought with Cobiah Marriner against the Dead Ship Harbinger. After retiring from the Krytan military, he used his severance to purchase a small clipper of his own, which he named the Valor. He stayed on good terms with Cobiah and the others over the years and spent more time than not in Lion's Arch. He went on to become one of the original members of the Ship's Council.