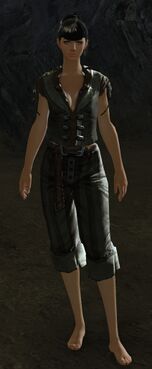 I'd rather die fighting than waste away in chains.

Deborah, nicknamed Debs by those close to her, is a Seraph of the Falcon Company who later joins the Vigil to help liberate Orr from the Elder Dragon Zhaitan's influence. She is also potentially the older sister of the Hero of Shaemoor.

Deborah was raised in Divinity's Reach alongside her younger sibling. She befriended many people from the Village of Shaemoor, including Priestess Amelia and Sam Beirne. Deborah eventually joined the Seraph and became a member of the distinguished Falcon Company led by Captain Tervelan.

The company was ambushed by centaurs some time before 1325 AE while on a patrol. The soldiers' fate was left a mystery due to destroyed documents and political intrigue, leaving the survivors of the ambush at the hands of bandits for an unknown amount of time. Deborah was eventually freed by her younger sibling and Captain Logan Thackeray when they were tracking down the corruption of Captain Tervelan and a Minister backing his corrupt actions.

After being freed, Deborah decided to join the Vigil to take up the fight to the Risen in Orr. During multiple missions, she and Tactician Beirne fought alongside and forged a close relationship, hinting at love between the two of them. However, when Deborah's life was threatened by Archmage Harshaf, Beirne sacrificed himself to save her. After Beirne's death, Deborah decided to take care of his family back in Divinity's Reach and his faithful coyote, Allie.

Appearances as a prisoner

Appearances as a Vigil Crusader

Bug:
Deborah's appearance in the latter Personal Story appears to be randomized if the player character did not do the Dead Sister storyline. [verification requested]
Retrieved from "https://wiki.guildwars2.com/index.php?title=Deborah&oldid=2046845"
Categories: