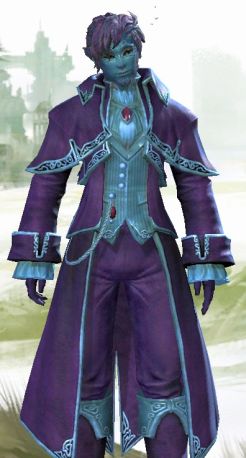 The renowned elementalist Ramei Arashi was tired, tired and disillusioned. After years of helping others win their wars in the hope they would aid him in freeing his beloved Ascalon from the hateful, godless charr, he finally realized their was no hope. Learning of Ventari, the centaur and Ronan, the human who had sworn off war, journeyed to Ventari's Sanctuary. There he sat down under the branches of an odd looking tree (I actually did this with him in Guild Wars: Eye of the North), went to sleep and never awoke again in this world. Approximately two-hundred=fifty years later, that same tree, now as big as city, sprouted a pod. That pod burst open and a sylvari with a fondness for hurling lighting bolts and setting things on fire awakens.

Religious beliefs/philosophy: Tries to follow Ventari's teachings, especially "Act with wisdom, but act". His greatest fear is that an innocent person will die because he is unable to save them.

Childhood: Awakened during the Cycle of Dusk, before his awakening saw The White Stag in the Dream.

Recent history: Learning to become an artificer and a tailor, to make weapons and armor for his own use and to trade.

Notable relationships: Rameî's mentor is Kahedins, Luminary of the Cycle of Dusk

Disposition towards other races:

Asura: leary of the asura

Charr: doesn't approve of the charr's treatment of the environment but has not inherited the hatred of the charr of his namesake

Humans: naturally curious about the race the Pale Tree has based his own race on

Rameî's Answers to 100 Questions About Your Characterl (note: he skipped the ones he thought not worth answering).

Rameî joined the Vigil, chose to aid the quaggan and to recruit a norn. He's my first (and probably only) character to complete Ascalonian Catacombs, Caudecus's Manor and Twilight Arbor in story mode. Rameî has completed all five racial cites and Lion's Arch. He's was first to complete Lion's Arch, third to complete Divinty's Reach. Rameî reached level 80 on the evening of October 23, 2012. On the afternoon of November 17, 2012 he purchased a Warden Staff of Force (sylvari cultural weapon tier 3) and upgraded it from major sigil of force to superior.

Chapter 1: Waking from the Nightmare

☑ Hounds and the Hunted

Chapter 2: A Season of Growth

☑ A Vision of Darkness

☑ A Splinter in the Flesh

☑ Secrets in the Earth

Chapter 4: Some Must Fight, That All May be Free

Chapter 5: A Friend In Deed

Chapter 6: This Far, No Further

☑ The Battle of Claw Island

☑ A Light in the Darkness

Chapter 7: The Cost of Victory

☑ The Battle of Fort Trinity

☑ Temple of the Forgotten God

☑ Through the Looking Glass

☑ What the Eye Beholds

☑ The Source of Orr

☐ Honor of the Waves