From Guild Wars 2 Wiki
< User:Noxx
Jump to navigationJump to search 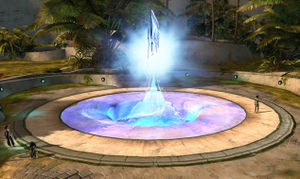 The Mystic Forge is a crafting station located in the heart of the Lion's Arch Mystic Plaza near the Trader's Forum waypoint, within the Heart of the Mists, and within each Borderlands' garrison and Stonemist Castle in World versus World. It can also be accessed with Mystic Forge Conduits and Mystic Forge Nodes from anywhere in the world. This strange object holds the imprisoned djinn Zommoros, who hails from distant Elona. If you offer him the proper gifts, he will create new items for you. Miyani provides information to learn more about Zommoros and the operation of the forge. She can be found next to the forge in Lion's Arch. She sells mystic recipes for coin and mystic items for skill points that are used in crafting items specific to the forge.

The mystic forge has various uses, ranging from transmuting weapons to higher level versions to the crafting of legendary weapons. The forge also plays a role in infused equipment. It plays an important function in economy by providing a goldsink and removing excess quantities of low level items. The Mystic Forge Node was an item temporarily introduced to remove an influx of common crafting materials present in the Trading Post. The forge is the most common method to obtain precursor weapons, as they can only be obtained otherwise as a very rare drop from enemies or chests. This provides a demand for weapons used in the generic recipe to obtain precursor weapons, along with other exotic weapons. In turn, these weapons can be obtained from drops or by crafting. For the crafted weapons, they all require Orichalcum Ores and Ancient Wood Logs as well as tier 6 crafting materials. Like weapons, low level crafting materials can be refined into high level materials.

The mystic forge is a source for many of the unique and high level weapons in the game, such as mystic and legendary weapons. These items often require mystic coins, high level items, and large resources.

Research on Mystic Forge recipes can be found at "Mystic_Forge/Research".

Common, fine and rare crafting materials can be promoted to higher tier materials using recipes that follow these formulas:

Ascended materials from Fractals of the Mists can be both upgraded and degraded.

Mystic Clovers are used in the creation of the Gift of Fortune, which is required to create all legendary weapons.

Both recipes pull from the same pool of random results, but the bulk recipe costs and yields ten times more. Using the recipe results in one of the following drops (multiply by 10 for the 10-Clover recipe):

The Mystic Forge can be used to create many specific exotic and legendary weapons, trinkets and upgrade components. See User:Noxx/Mystic Forge/Equipment for a list of known equipment recipes.

In addition to materials and equipment, the Mystic Forge can be used to create a variety of other items, including upgraded siege weapon blueprints, miniatures, tonics and gifts. See User:Noxx/Mystic Forge/Other Items for the remaining recipes.

These recipes don't give you the respective items, instead they give a Recipe item to learn in the appropriate crafting discipline.

Siege weapons used in World vs World can be upgraded into more powerful variants at the cost of requiring more supply to build.

PvP rewards can be salvaged with a PvP Salvage Kit into PvP crafting materials (Arcane Powder, arcane tokens, rank tokens or equipment tokens), which can then be used in the following Mystic Forge recipes: