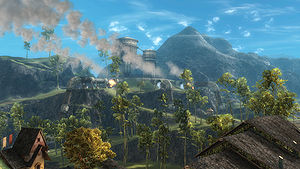 Events, along with other map completion activities, are designed to replace the traditional concept of MMORPG quests. Players are notified when there is a new event nearby rather than having to look for an NPC with an exclamation mark, for example, over their head. Traditional quests can have consequences that many players find to be negative, such as "spawn camping". The dynamic event mechanic, along with other map completion tasks, were created to prevent these types of issues, by promoting player cooperation instead of competition.

Another problem with the traditional MMORPG questing and exploration system is what might be called kill stealing. In World of Warcraft, for instance, usually only the first player to attack (or "tap") a mob would receive experience and/or loot for the kill, unless the cooperating players are in a party, although even then the experience was only divided among the party members. Guild Wars 2 took the concept to the next level, by rewarding all players that participate in an event 100% of any experience gained, without the need of a party. Likewise, loot is calculated and given to each player that participated, as if they were the only participant. Also, to keep a consistent level of difficulty along with increased participation, event difficulty is scaled dynamically based on the number of active participants. Also note that not all events require combat to complete.

Dynamic events are cyclical in nature and often chained together in a series called a "meta-event" (or even just "meta" by the younger generation). They do not necessarily follow a fixed schedule. Many are only triggered (i.e., become active) if certain conditions are met—for example, if a snow storm strikes an area or night falls in a graveyard. Many events are triggered by the presence of a player entering the events' immediate areas. Once an event has been triggered, it will continue to progress whether or not players participate in that event, although in certain instances it might pause if the NPC(s) involved end up being downed, in which case the first action players must take is to revive them.

Although the repetitive nature of events means that consequences are ultimately temporary, the state of some events can persist for days, or even until the next server reset or update, unless players appear and progress the event or event chain.[1] Also, the outcome of some events effect other events, including whether they will even trigger. This adds an amount of variety to the events, another feature of Guild Wars 2 that differs from many MMORPG's. Each event has one or more NPC's associated with it, with whom the player can optionally talk with in order to learn more about the story and lore relevant to the event.[2]

In addition to singular events, several common types of event chains can be observed. One common type of chain progresses linearly and then repeats after a short while. Other, conquest-like battle events, often part of "meta events", occur as well. In these meta-events, players side with an allied faction to fight enemies and attempt to capture one or more locations on the map or take down several (often tough) enemy forces, after which the enemy attempts to take them back, or vice-versa, and succeeds unless enough players are there to participate.

Each event is always in one or more "states", and thus can be thought of as finite state machines, in which a computer program, or in this case game event, changes, advancing through various states depending on conditions. While it can be useful to understand the various states, please note that they are mainly used internally by the game engine, and it is not necessary to know them all. Following is a list of the possible states that an event can take:

The foremost requirement for triggering an event is to be in the right place at the right time. Events can be discovered in a number of ways, such as exploring the world or conversing with non-player characters. Whenever a player comes within range of a new event, a New Event Nearby notification appears across the screen, along with an event assistant instance on the UI's top right-hand side. In cases where the event occurs above or below the player, for example, on top of a mountain peak or while swimming, a marker is used to indicate whether the event is physically above or below the player's current position. The player's map is also updated with a variety of event-related markers so long as a player stays within the required range. Should a player wander away from the event's location for too long, they will receive a notification stating "Due to inactivity, you are no longer participating in EventName." and will no longer earn event rewards if it is actually completed (by others).