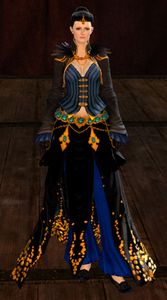 With my sixth sense, I shall look into the future! Trust Madame Gilda, my poppets!

Madame Gilda is a fortuneteller at the carnival in Divinity's Reach.

Madame Gilda joined the Ringmaster's Carnival Gambade in Divinity's Reach in 1325 AE and performed as a fortuneteller with accurate predictions of the future during the show. In one of the shows she predicted the future of the Hero of Shaemoor as well as the Hero's childhood friend—Lord Faren, Petra, or Riot Alice depending on the Hero's background. When the Hero inquired her about a missing boy named Garand who had last been seen attending the carnival, Gilda suggested talking with the Fabulous Chakravarti while giving an ominous warning about the investigation uncovering startling secrets should the Hero pursue the leads.

Ostensibly harmless, Gilda was actually aiding the Ringmaster's plot which involved hypnotizing citizens with the Floating Grizwhirl and its copies and using the victims to stage an uprising against Queen Jennah. Once the Ringmaster had secretly acquired enough Grizwhirl copies from his accomplice, the inventor Uzolan, the carnies staged their newest show which attracted a large audience in Divinity's Reach.

The plot was foiled by the timely arrival of a group of Seraph led by the Hero and Logan Thackeray who had discovered what the Ringmaster was up to. They killed the Ringmaster after a clash and released the affected citizens from the hypnotic state they had been in. The rest of the carnies were arrested and sentenced to jail for being the Ringmaster's accomplices in the plot against the Crown. Before being taken away, Gilda lamented how her sixth sense had failed her when she had tried to foresee how the scheme would turn out in the end.

Minister Caudecus's journals, which the Pact Commander recovered from Beetlestone manor during the Siege of Divinity's Reach in 1330 AE, revealed that the Ringmaster was a Separatist from Ascalon, as were many other carnival workers. The use of the Grizwhirl had been part of Caudecus's many plans to dethrone Queen Jennah. It was left unclear if Gilda and the Ringmaster's other lackies were Separatists as well.

After serving her sentence, Madame Gilda was released from jail and returned to the Divinity's Reach carnival to continue work as a fortuneteller. During one of the shows in 1331 AE, the carnies and the audience suddenly witnessed a strange portal opening up and Commander Lonai, Braham Eirsson, and the Pact Commander arriving through it. Lonai used the resulting chaos to her advantage in an attempt to kill and Awaken as many people in the carnival as possible to distract Braham and the Commander while the pair tried to stop her. The clashing trio disappeared through another portal shortly after they had appeared, however, leaving the citizens of Divinity's Reach confused and terrified about what they had witnessed.