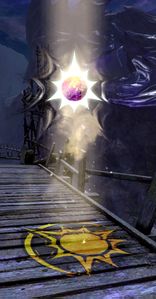 Use the griffon to fly directly there, starting from the sand path above the The Teratohedron. This requires Jackal tier 3 to access; the sand portal is immediately south of the hero challenge in the pyramid.

If you have Wall Launch and Bond of Vigor, you can fly there from

Destiny's Gorge Waypoint — with a Skyscale. You will need to go through an opening in the rock to the SE of the waypoint which then opens out to an area surrounded by cliffs. Scale the eastern cliffs with Wall Launch and Bond of Vigor to get to the top.

All methods below require the High Vault mastery on your Springer.

Destiny's Gorge Waypoint — , head towards Fortunate Strike. Once there proceed into the southern cave entrance, and up the rising rail track leading straight back. Be careful as there are several veteran Forged in here. From this ledge looking up you can see a Zephyr tent - this is the upper exit to this cave. Using a Springer, jump up the ledges to the left, with the third jump requiring you to jump slightly around a corner to sit on top of a pillar, from which you can then drop down to the platform beside the tent. Climb the path to the plateau.

Once at the plateau, look for the angled broken scaffolding just below the mastery point. Use this and your Springer to get to the mastery insight.

This alternative path uses some slightly harder jumps but is shorter. From the same waypoint climb the wooden path leading above the waypoint, and, heading east, use a raptor to cross the ravine. Visible on the world map is a green cutout in the cliff, which corresponds to a path curving left around the corner with air and earth elementals. Before leaving the cutout, mount a Springer and after performing a small jump onto the obvious steps, perform a further three jumps - one up the western wall, and a further two jumps to the south to emerge at the top on the plateau. Again use the scaffolding to reach the mastery point.

Similar to the above (elemental path), use your raptor to cross the gorge and continue around, through the cave. Hop down to the wooden walkway.

Follow the walkway north until it opens out, and you can see a small stack of huts to the east. Use your Springer to jump to the roof of the top hut, and then to the sandy ledge to the north-east. Ahead of you, you should see a huge wall of purple crystal, adorned with broken fencing.

At the northern end of the sandy ledge (beside the ripped white fabric roofing), walk up the small purple crystal ramp. Above you is a small triangular opening, at the bottom of the fencing. Use your Springer to reach it.

Above and to the right of the triangular opening is a jagged purple crystal ledge. You can reach it with your Springer, but it will require some careful positioning.

From the jagged purple crystal ledge, use your Springer to jump up and over the fence. Drop down to the big open area. The mastery insight is to the south-east, atop some crooked scaffolding.