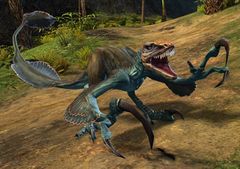 She's so scaly and cute. I shall love her forever, and I shall name her "Shrieksy."

Shrieksy is the pet raptor of Kozzak. Discovered and adopted during the Snaff Prize competition in 1325 AE, she is a loyal if a bit mischievous companion who is not afraid to fight alongside her allies and who later participates in the Pact's campaign against the Elder Dragon Zhaitan.

During the Snaff Prize competition of 1325 AE, a krewe consisting of Pokka, Kozzak and the soon-to-be Snaff Savant of the College of Statics background presented their entry: the VOED which could be used to locate potent magic. While demonstrating the effectiveness of the invention, the krewe discovered an egg which hatched. Kozzak took an instant liking to the raptor hatchling, who likewise imprinted on him, and named her Shrieksy. The hatchling joined the krewe in their search for other magical artifacts and fought alongside them against a rogue earth elemental which threatened the lives of the audience.

After being announced as the Snaff Prize winners, the krewe, Shrieksy and Zojja headed deeper into Metrica Province to investigate the source of arcane energy which the VOED had picked up. The Snaff Savant was suspicious of Shrieksy's shifting gaze during the search as it was unclear at the time whether the hatchling was loyally following her master Kozzak or hungrily preying for one of the krewe members. They eventually located the source, an ancient artifact which turned out to be a part of a larger whole, and returned back to Rata Sum for further studies.

The Inquest infiltrated the lab but the krewe was able to catch the infiltrator for interrogation. Kozzak off-handedly suggesting feeding the Inquest agent to Shrieksy much to the raptor's delight, but the rest of the krewe decided to keep the agent alive for further questioning while defending the lab against an Inquest assault squad. Despite the initially successful defense, they were forced to hand over the artifact to the Inquest representative Teyo who had threatened to blow up the entire area with explosives if her demands were not met. After Teyo's departure, Pokka, Kozzak and Shrieksy stayed behind to clean the lab while the Savant left to search for the other artifact pieces with help from the VOED and Zojja. The krewe eventually learned that the Savant and Zojja had successfully discovered and united the artifact pieces and used them to access Gadd's old lab which contained a treasure trove of knowledge.

While walking Shrieksy sometime later, Kozzak heard that the Savant was participating in golem fights and that betting was already ongoing. He and Shrieksy attended the fights to inform the Savant about the turn of events, surprising the Savant who had not even signed up for the fights yet. The pair enjoyed the bout and celebrated the Savant's eventual victory over the other contestants.

A few months later, Pokka, Kozzak and a grown up Shrieksy enlisted in the Pact to help in the fight against the Elder Dragon Zhaitan and followed the troops to Zhaitan's realm of Orr. Joining forces with Priestess Rhie, Marshal Trahearne and the Pact Commander, the krewe traveled to the Cathedral of Silence where they used the VOED to trigger an arcane resonance which revealed a vision of the past involving Grenth's worshipers.

The vision recreated by the VOED helped Priestess Rhie recreate a ritual to summon the Avatar of Grenth, one of the Seven Reapers, and ask for guidance about the whereabouts of the enigmatic Source of Orr which Trahearne and the Commander needed to locate in order to cleanse Orr from Zhaitan's corruption. In exchange for the information, the Reaper asked the group to kill the corrupted Risen Keeper of the Shrine so the Keeper's trapped soul could be returned to Grenth. After accomplishing the feat, the group returned to the Reaper who revealed that the source was located at the Artesian Waters hidden behind the Cathedral of Verdance dedicated to Melandru.