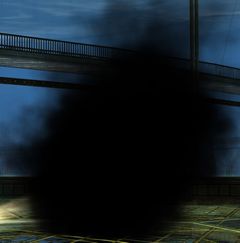 Liadri the Concealing Dark is a human from the Mire Sea and a participant in the Queen's Gauntlet. She is fascinated by darkness and cosmic spells and her fighting style is to hide in the shadows, and then unleash its power.[1]

Liadri begins the match invulnerable, until opponents can remove her three stacks of Shrouded by Darkness. During this time she will summon Shadowfall, an AoE attack covering a quarter of the arena and inflicting near-fatal damage. These can be easily dodged by counting down approximately three seconds from when the red circles first appear. In addition, Cosmic Rifts spawn periodically and will pull opponents towards them, regardless of the opponent's position in the arena. While players can dodge the pull, it is usually better to destroy them when they first appear.

Liadri also summons Visions of Mortality, slow moving clones of herself. If a clone touches a player, they will be instantly downed or even die if already downed. The only way to fight them is to lead them into the whirlpools of light that appear on the floor. When they die, they leave an Orb of Blazing Light which can be picked up and thrown at Liadri to remove one stack of Shrouded by Darkness.