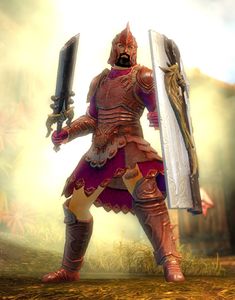 Turai Ossa was an Elonian hero that fought and defeated Palawa Joko. After his victory, he was anointed as king and ruled over Kourna for years before taking a large group of his people on the Great Pilgrimage to the Crystal Desert in order to Ascend at Augury Rock. Infighting amongst his people, along with fighting the Forgotten resulted in their demise, and their ghosts remained in the Crystal Desert until the Chosen of the Flameseeker Prophecies arrived to Ascend themselves. Turai assisted in their journey and was rewarded with access to the Hall of Heroes.