We think the biggest, baddest monsters terrorizing Tyria’s farmlands, swamps, coastlines, tundra, volcanos—and more!—have gotten a little too comfortable in their routines. We’re shaking things up by hitting them where it counts—right in the loot drops.

World Boss Rush is a special event that adds bonus rewards on successful completion of certain World boss events. Achievements associated with this event can be found here. 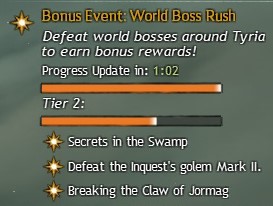 Throughout the event, a progress bar will track the progress of the Community Goals. The tracker updates in 15-minute intervals, increasing as more of the above World Bosses are slain.

Players will receive rewards for all tiers, so long as they participate in one.