Hello! My name is Sirius, and I've been playing Guild Wars since Nightfall was released. Since that golden age so long ago, I've played through all the campaigns as well as having spent a fair amount of time in PvP--I really enjoyed Alliance Battles. My favorite classes have been the Warrior, primarily, as well as the Ranger and Elementalist. I enjoy melee combat, but prefer speed over strength, so I'll favor the Ranger in GWII. I can't wait to run around with a greatsword modding my Traits for major AoE crits! My alternative classes look like they'll be the Warrior and Guardian, although the Mesmer looks amazing and the Necromancer is growing on me. Well, I hope to see you in-game!! 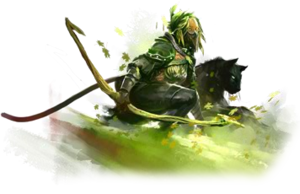 An example of a Ranger

While Syreas inherited his spiritual views from his father, he gained his political knowledge through his mother's side. He often heard her speak of how dearly she wished she could see her ancestral homeland of Ascalon; and when she passed away of natural causes, Syreas was overcome with remorse that she had never gotten her wish. Soon after, he enlisted in the Ebon Vanguard, where his natural physical talents were augmented with formal instruction. He volunteered often for the patrols that went beyond Ebonhawke's walls in the hopes of clashing head-on with the Charr warriors he believed were corrupting his homeland. Syreas was still at Ebonhawke when Kralkatorrik awakened, causing the Ogre Revolt. Syreas fought side by side with Charr prisoners to repulse the Branded off of Ebonhawke's walls. He realized then that there were much worse creatures than the Charr; the Elder Dragons were truly a threat to Tyria. His reflections led him to believe that his mother had been wrong in thinking humans had a lasting claim on Ascalon. There was no point in fighting over the past any longer; Syreas regretted his haste to take the lives of fellow beings. He abandoned the Vanguard and returned to Divinity's Reach to form a new alliance of free warriors, eventually making his way to Lion's Arch and beyond. This was the beginning of Syreas' second life--and he would continue to grow in strength until he led an army to slay the Elder Dragons.

Sayrent Memyry: Human Warrior blessed by Grenth. He is Syreas's darker half, the side those who know him rarely see. Grenth has shown him that everything will die, everything has a time, and he is coldly determined to make sure the Dragons' time comes soon. He is equally skilled with dual longswords and greatsword, preferring to remain mobile and bleed his enemies to death than stand toe-to-toe with them. This side of him thirsts for Kralkatorrik's blood above all else.

Kamiss Blackblood: Norn Guardian favored by the Raven. He is the man who raised Syreas, and while they have been physically separated over the past few years, their hearts have never grown apart. Kamiss aims to kill Primordus, seeking out Destroyers where he can, although his prayers go to his son dealing with the other Dragons. He fights with sword and shield, as well as a greatsword. His strength lies in unlocking his allies' potential, although he deals damage right alongside them.

Kenam Ashbringer: Charr Elementalist belonging to the Blood Legion. A master of fire magic, he can kill most enemies before they're within striking range. He and Kamiss have a long history of fighting alongside one another, and considers himself an uncle to Syreas--although it took his "newphew" much too long to see it that way.

Arik Shadowblade: Human Assassin. Syreas' best friend since they were very little, he will stick with him to the ends of the earth. He utilizes a sword, dagger and a shortbow for hit-and-run attacks. He revolves around dealing heavy damage and quickly retreating, but prizes mobility and control over stealth. He is sensitive and kind, although he will not hesitate to take violent action to preserve his friends. In the end, however, he sheds a tear even as his blade drips.

Krae Terrendar: Charr Warrior. He uses a mace, shield and hammer as a staunch defender of his friends. His focus is on preventing damage from ever reaching him and his allies, as well as increasing their own power.

Dryetn Kyrantel: Sylvari Guardian. A twisted sylvari who doesn't quite understand morality, he enjoys fighting perhaps more than he should. He is skilled in both damage and control, and his goal is nothing short of breaking his enemy into pieces.

The Dreamless One: Sylvari Necromancer. A quiet, intelligent master of the dark arts, using them for what he considers noble purposes. He is skilled at controlling conditions for his allies and turning them against his foes.

Zakk Brinker: Asuran Warrior. Uses a mace, shield and hammer. His greatest strengths are holding an area and protecting his allies. He does little front-line fighting himself--instead, none pass his line.

Caleb Aeglin: Human Ranger. Uses a bow, sword and axe. He is incredibly fast and a powerful damage dealer. He runs a black-ops group before going straight with Raven's Hollow.

My guild and I have created a small glossary of terms for character builds. When asked what build you're running, instead of saying "damage and support" you can say carry. We'll use this terminology within our own guild, but if you would like to use it and propagate it, you're welcome to.