Twilight Assault is the next chapter in the story of Scarlet Briar, the crazy sylvari who caused chaos in Diessa Plateau and Wayfarer Foothills during Flame and Frost with her Molten Alliance, later she was responsible for the assassination of Theo Ashford during Dragon Bash and at the Queen's Jubilee she revealed herself and attempted to assassinate Queen Jennah twice, eventually she was defeated and fled from Divinity's Reach. Now, the Lionguard has discovered a new Aetherblade base, in the Twilight Arbor, home to the Nightmare Court.

The new update introduces an entire new and permanent path to Twilight Arbor and replaces one of the least popular paths: Path 3. The Aetherpath is a combination of original TA mechanics and newer mechanics we saw in the Molten Facility and the Aetherblade Retreat.

Upon entering the path, it'll be the same as any TA path you're used to: Blossoms, Husks, Nightmare hounds, Spiders, etc. As soon as you reach a big group of Jungle Wurms, Scarlet will appear as a hologram and starts talking and following you and your party. After you've defeated all the vines and wurms, it's becoming interesting: Sparki and Slick appear. Slick covers the area with flammable oil and Sparki ignites it afterwards, and thus creating a massive amount of fire. Lava Elementals spawn from the flames and the oil attracts powerful Oozes. This part of the new path is really cool, it's easy if you spread the tasks and communicate with one another, but hell if you don't. The objective is to escort at least two oozes to the other side, so that you set the gears that open the gate to the next area in motion, one on the left and one on the right, but you have to be careful, the Lava Elementals will try to kill and immobilize the Oozes and if an Ooze touches the fire, it will die, the Oozes themselves can also deal major damage to the player if it's too close, but if you go too far away it will run to the burning oil, killing itself in the process.

Once this is done, you can go to the next area and see that Scarlet has sent in some Aetherblade to clear the wildlife and attempt to raze the jungle, so she can expand her base. From now on you will start losing the Twilight Arbor feeling and you will gain more the Aetherblade feeling. Here you'll see Steam Watchers patrolling the area, they are unable to deal damage, but instead will alert Aetherblade, and they'll keep doing this until you've killed them, so kill them as soon as you can. While you are making progress, Scarlet will talk to you in her awesome but crazy way, definitely worth to stop for 10 seconds to listen to what she has to say. When you approach the next gate, you'll see a group of burning Nightmare Hounds running away, this is another proof of the Aetherblade manipulation in Twilight Arbor, which is pretty cool. 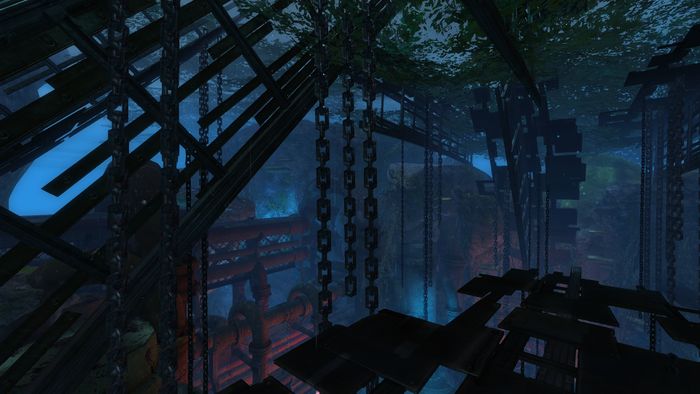 When you enter the gate the "real" battle will begin. First we had the Molten Berserker and the Molten Firestorm, then Mai Trin and First Mate Horrik and now it's time for Sparki and Slick! Sparki is a female Asura and uses a smaller version of the Molten Firestorm suit, she is specialized in igniting stuff. Slick is the old grumpy Norn who will spray toxic oil over the area, and Sparki will burn it afterwards, causing the toxins to be released and damage the players. Also here, the oil will attract Oozes, and they will absorb the oil, on this way you can prevent Sparki from burning the oil, but you have to watch out, when the Ooze dies it will release 10 stacks of toxic, so try not to get the Ooze killed. You can feel it already: interesting mechanics all over the place and requires the party once again to work together so that both the oil can be cleared and the bosses receive enough damage to be killed. Once you defeat one boss, the other will absorb power of his/her defeated ally, just like the Molten Facility.

After you've defeated the duo, all of Twilight Arbor is gone, and it's 100% Aetherblade now. You will enter the base and discover Scarlet's true intentions... this part contains the core of this chapter of the Living Story, so I won't spoil it here, the new path has been released so check it out for yourself, it's definitely worth it!

Conclusion: The new path of Twilight Arbor, The Aetherpath, looks exciting and introduces more of the popular mechanics we saw in the Molten Facility and the Aetherblade Retreat, but this time it's permanent, something the GW2 community wanted badly.

This early preview article was written by Landon144. If you might be interested in writing future preview articles, please volunteer at Guild Wars 2 Wiki:Preview play day.