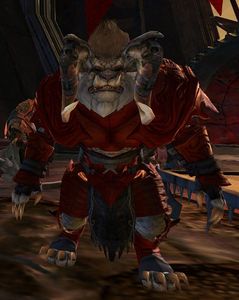 Tribune Fierhan Sparwind is a tribune of the Blood Legion who took part in the defense quorum convened by the three allied High Legions to fight against the Molten Alliance.

After becoming the tribune of the Blood Legion, Fierhan Sparwind served his legion dutifully in the Black Citadel under the jurisdiction of Imperator Smodur the Unflinching of the Iron Legion. He was relegated to handling paperwork and taking in reports from his centurions, a task he sometimes lamented as he would have wanted to spend more time on the field.

In 1325 AE, Fierhan witnessed fellow tribune Rytlock Brimstone instructing a recently promoted Legionnaire to track down Rage Steeltongue. Rage had once been a member of the Legionnaire's warband but had since defected to the Flame Legion out of spite and needed to be stopped before his actions and information could threaten the Black Citadel.

Following the Molten Alliance's incursions into Ascalon and their subsequent capture of charr as slave labor for their molten facilities in 1326 AE, Imperator Smodur called for every tribune in the Citadel, including Fierhan, to attend a defense quorum to discuss the High Legions' response to these acts of aggression. Fierhan and Rytlock collaborated with managing the Blood Legion's counterattack and learned about the actions of the gladium Rox, the norn Braham and the Pact Commander which had led to the dismantling of the Molten Alliance's operations in the region.

If charr
Blood Legion welcomes you to the command Center. What brings you here?
(If Blood Legion charr)

Tribune. How may I serve the legion?

Ah, <Character name>! Rytlock Brimstone himself has mentioned your name. But you're already serving nobly just by boosting legion morale with your victories.

I admire your dedication to the legion.

And I envy your future glory on the battlefield. These days, I spend far too much time behind a desk. But, I suppose every soldier has his own battles.

And all together make victory possible. Good-bye.

(If not Blood Legion charr)

Blood does what we're always done. We fight. We crush. We maim. We win. Were you expecting anything less?

How is it you remain so confident in your legion?

Put a weapon in our hands, point us at the enemy and then get out of the way. Is that clear enough for you, soldier?

If not charr
You. <Character race>. State your business.

Just passing through. What do you do here?

I'm a Tribune. A commander in the Blood Legion. I'm responsible for the success or failure of every Blood Legion warband in this area.

Can I ask something else?

You are testing my patience, but go ahead. (Same dialogue options as the beginning)

What's Blood Legion all about?

Blood Legion is the heavy end of the hammer and the piercing end of the sword. We're pure force of arms and martial strength.

I won't waste any more of your time.

A rare—and superior—breed of soldier. It's my honor to share command with him. He's courageous and ruthless, yet he speaks highly of his comrades outside the legion.