The Long Way Around

The Long Way Around 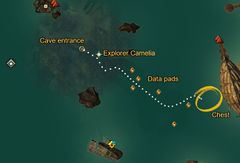 Map of The Long Way Around

The Long Way Around is an Explorer achievement and mini-dungeon located in an underwater cavern in Terzetto Bay, directly west of Fort Trinity in Straits of Devastation. Explorer Camelia, found at the entrance of the large underwater cavern, is worried about Scholar Fryxx, who has locked himself up in a cave behind an asuran force-field gate he designed to keep Risen out. Camelia has been trying to get the gate open, but the numerous Risen Hands and dead fish keep on shooting goo at anyone who comes close to them, making her unable to deactivate the force field.

The cavern entrance is located east of

Vesper Bell Waypoint — around the center of the triangle made up of three small islands in Terzetto Bay. The entrance can be seen by looking to the south-east at the bottom of the shallow bay.