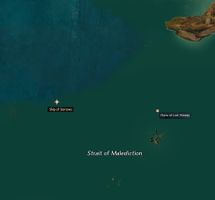 Map of Ship of Sorrows

The deck of the Ship of Sorrows

The Ship of Sorrows is an Explorer achievement and mini-dungeon located in Strait of Malediction within Straits of Devastation.

The mini-dungeon is in a sunken ship west of the

You can either enter the ship via a hole in the top "roof" deck or a "window" to the deck or approach the sunken ship from the southeast and head through a hole in the side of the ship; in the center of the deck will be an open hatch/stairwell into the hold of the ship that you will need to enter. The interior can be quite disorienting due to the tight viewpoint combined with the angle and tilt of the wreck.

Once at the bottom, turn left and left again so that you are pointing to the southwest, then go all the way to the end of the corridor, turn left, and then turn right down another set of stairs. Turn right twice so that you are pointing northeast along the ship, and continue to the far end of the room where the chest should be located, tucked away in the the back corner on the right. The chest is surrounded by some purple lighting effects, various objects, and angles upwards from your entry point to the chamber. You do not need to loot the chest in order to get the achievement, but if you wish to do so bring a friend, as the room with the chest has several Risen Pirates that re-spawn quickly.