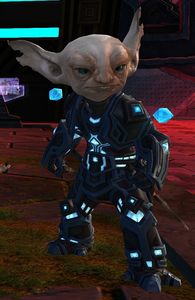 Nice try, but my orders are to see you dead. And I always follow orders.

Rakt is a top-ranking asuran officer in the Arcane Eye who is tasked with kidnapping Professor Gorr in order to prevent the professor's revolutionary theory from being spread around Rata Sum. Cold and calculating, he will stop at nothing to carry out his duty and does not care how many people he has to silence to get the job done.

Rakt worked for the Arcane Eye and eventually became one of its top-ranking officers, earning a reputation as a cold and calculating agent. In 1325 AE he arranged the kidnapping of Professor Gorr, whose revolutionary Draconic enchanto-consumption theory threatened the Arcane Council's interests, and planted another asuran body in Gorr's lab while spreading a lie that the professor had died in a sudden lab accident. Rakt then had Gorr transported to a secret Arcane Eye base in Garenhoff to keep him away from prying eyes.

While working on the finishing touches on Gorr's lab to make the evidence of the "accident" look convincing and masking his efforts as a crime scene investigation, Rakt ran into the Snaff Savant and one of the Order representatives who were carrying out an investigation of their own. The agent did not recognize the pair and drove them off but was unaware that the pair had already checked the body bag and uncovered the ruse of the Arcane Eye faking Gorr's death.

Rakt later learned that someone had helped Gorr escape from Garrenhoff. He tried to find the professor to either capture him again or, failing that, use extreme methods to silence Gorr and anyone else who had learned his theories for good to prevent information from spreading. Zojja, the Savant and the Orders came up with three possible ways to handle the situation: the Durmand Priory suggested staging a conference in Rata Sum to disseminate Gorr's theory with as many witnesses present as possible, the Order of Whispers suggested reprogramming Rata Sum's Peacemaker golems to broadcast the theory far and wide, and the Vigil suggested assaulting the Arcane Eye's hidden base in Gendarran Fields to take out Rakt before the agent could do the same to them. Regardless of which plan of action the Savant's party ultimately chose, Rakt confronted them and was killed for trying to stop them.

Section-stub. This key section of the article is incomplete. You can help the Guild Wars 2 Wiki by expanding it.
Reason: If no skills can be stolen, remove this part, otherwise list
Retrieved from "https://wiki.guildwars2.com/index.php?title=Rakt&oldid=1761792"
Categories: