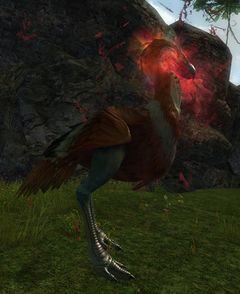 Part of
Kill the Bloodstone-Crazed Moa

Legendary Bloodstone-Crazed Moa is a legendary moa that appears in Diessa Plateau, Kessex Hills, Brisban Wildlands, and Snowden Drifts. The creature is empowered by a Bloodstone Sliver from the Maguuma Jungle bloodstone, improving some of its attacks and giving it the ability to create Blood Links to targeted characters.

Section-stub. This key section of the article is incomplete. You can help the Guild Wars 2 Wiki by expanding it.
Reason: Could be missing a couple more