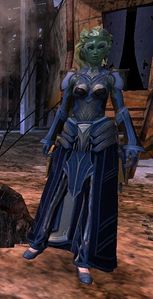 Historian Merry is a member of the Durmand Priory found at the Kenning Testing Ground who is interested in the jotun.

Who are you talking about?

The jotun. Theirs is the most precipitous fall from grace of any society in history. Once the most powerful and advanced race on the continent, they devolved into the brutish violent creatures we see today.

After they conquered all their enemies, they turned on one another. Lust for knowledge gave way to bloodlust. They got meaner, dumber—and if the few artifacts we've found are any guide—a lot uglier too.

Why is the Durmand Priory so interested in the jotun?

They once had magic and created enchanted monuments throughout the Shiverpeak Mountains, now lost to time. The jotun themselves have no memory of their location.

So you're here trying to find the ancient jotun monuments?

Imagine what we might learn from them? What goes into creating such a dominant society? And what goes into destroying it? The secret to surviving the future may well lie in exhuming the past.

I hope you're right.

I see. See you around.

I can understand your fascination.

Lore discrepancy:
Historian Merry states that the Jotun's fall from grace may, in addition to the psychological changes, have had an affect to their physical appearance.
However, the few in-game models showing Jotun prior to their downfall (Elder Thruln, Jotun Spirit, Jotun Ghost) does not reflect this fact.
Retrieved from "https://wiki.guildwars2.com/index.php?title=Historian_Merry&oldid=1328998"
Categories: