Shadows Creep is an achievement awarded for witnessing one of several twisted happenings which occur throughout Bjora Marches.

A Strange Kodan is standing still and talking to herself, at the crossroad between Boreal Pass, Fallen Ruins and Eaglewatch Rise. If you approach her, she falls and dies. If you interact with the corpse, you learn this kodan has been dead for a few days at least.

Interacting with her corpse
Corpse: She's been dead for quite some time. 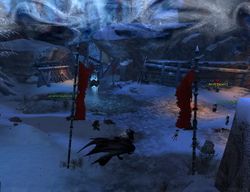 The occurrence at Still Waters Speaking.

Arriving at Still Waters Speaking, you find everyone there dead. The "Whispers" screen effect appears and eerie music plays, until suddenly everything is seemingly normal again.

Fallen Kodan Berserker: All will come to an end...

The occurrence at the grotto.

A Strange Kodan stands entranced before a small Idol of Jormag, at the Whisperwind Grotto, surrounded by a ring of dead and frozen kodan (as if they had sat there listening to the whispers until they died). If you approach him, he will talk about how the whispers say your voice is not your own, and that the whispers tell him to stay.

Standing near the Strange Kodan
Strange Kodan: I would never think of leaving. Why would you say that? We are friends, and friends do not abandon each other.
Strange Kodan: No. No. You speak in riddles. Rhymes with no meter. Your voice is the air, I breathe it to live.
Strange Kodan: The others, they heard the whispers but they did not listen. They tried - they tried so hard. But time ran out.
Strange Kodan: There is peace in the ice. The quiet of the snow. The only voice I hear is the one in me.

Talking to the Strange Kodan
Strange Kodan: Your voice...you believe it is still yours. But the whispers say otherwise. The whispers tell me to stay.

After destroying the idol
Strange Kodan: Your voice is different from the others. How long have I been here?
Strange Kodan: Koda... My brothers and sisters... The words held us. The whispers. I nearly joined them.
Strange Kodan: I must return to the village and speak with a shaman. My brethren deserve the proper rites. Thank you.

The Writing's on the Wall[edit] 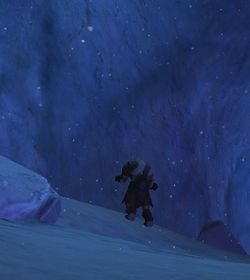 The occurrence at Kodan Shipwreck.

A message is carved under the Kodan Shipwreck by a Strange Kodan. You can read the Curious Carving after he finishes. 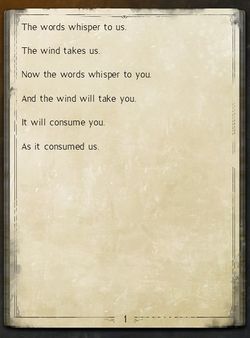 Text from the book.

A circle of kodan stand outside the Cavern of Lost Sons. In front of them is a "precious" book that they try to persuade you to read it. While reading the book, they disappear in a flash of light.

Logger: Would you like to read our book?
Logger: I think you would like our book.
Ice Fisher: Please read to us. I cannot see.
Ice Fisher: The book is all we have left. Take it, please.
Kodan Guard: Is somebody there? Please, read the book.
Kodan Guard: Please, take this book. Take it far away from here.

Interacting with the book

Talking to the kodan
Kodan Guard: I think you would like our book.

A Strange Kodan jumps off a cliff to his death, around Kodan's Leap. This occurrence does not award the achievement. 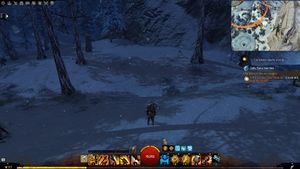 A Kodan logger can be found south of the spike north of Shrine of the Vigilant Eagle with the bodies of several people around him. As you speak to him, the bodies turn into trees. He carries two dirty cleavers.