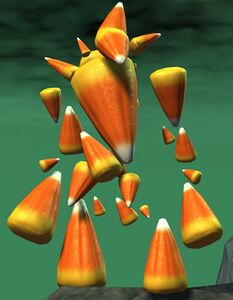 Veteran Candy Corn Elementals are Halloween creatures from the Mad King's Realm that can be encountered in Kryta during Halloween when a Haunted Door is opened. As of the Blood and Madness release, they serve Mad King Thorn and attack Bloody Prince Thorn's forces on sight.

All of the Veteran Candy Corn Elemental's attacks have a chance to grant enemies Sugar Rush for 2 seconds, which causes Sugar Crash for 10 seconds once it expires.