Lost and Found was a Flame and Frost achievement released as part of Flame and Frost: The Gathering Storm. Players had to locate and retrieve treasures scattered around Wayfarer Foothills and Diessa Plateau and give them back to refugees in Lion's Arch.

Players can find the treasures in Snow-Covered Objects in Wayfarer Foothills or Dirt-Covered Objects in Diessa Plateau. Each must then be returned to a different NPC at the refugee camp located at Farshore Ward in Lion's Arch, south of Farshore waypoint.

Each object is located in one of several locations on the map, typically near the invader events that began during The Gathering Storm. The specific location varies across worlds and changes daily. For a variety of reasons, it can be difficult to find all three within a zone on the same day; if that happens, you can guest to another server or try again on a different day. There may be more than one possible spawn point near a specific location, so it is best to search around the area. 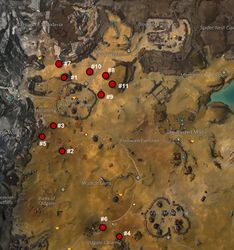